Like Sara with Serendipity, there’s a new baby in the house. 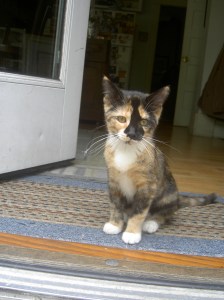 We were on the porch eating dinner when we heard the sounds of a kitten in distress. My son (Corey), his friend and I raced outside and found her across the street, in the bushes leading down to the river. She was far from any houses on that side of the street. We came to the conclusion (from the scrape on her chin) that she’d been thrown from a car, left to fend for herself. She seemed scared to be alone and came to us gratefully.

We brought her in the house and she made herself at home. My son said he’d take her to college with him. I thought that was a good idea. At the time. Now she’s been here a week and I can’t imagine how it will feel to have her gone.

I would tell you her name, but my son has yet to name her and he won’t let me do it. (Her name is Skitters. Don’t tell him I said that.)

Here is an odd thing: Corey’s cat died of extreme old age in May. Princess was an unusual-looking cat. Technically a calico, but with less white than they usually have. This new kitten, except for her face, could be a twin to Princess. She even walks the same way.

We miss Princess and we’re very grateful for such a perfect replacement.

Although the cornfield boys aren’t too happy about it….